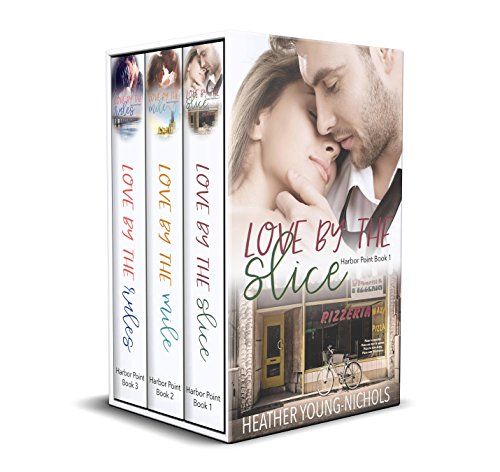 Love by the Slice:

Bianca wanted the life that comes with being part of her family’s pizza parlor. When sexy Gio begins working for them, she does her best to ignore their attraction. She has rules about dating people who work for her Grandpa. Ultimately she can’t deny the truth…she’s falling for him.

Gio had one job when he started working at Romano’s…but then he breaks her heart. Now he must turn his back on his family for a second chance with the girl whose heart he destroyed.

If he can convince her to trust him again.

Love by the Mile:

Falling for a man who only uses sex as a weapon won’t be easy.

Trapped in a life of seduction and lies, Sal’s never had anything real. Sex was merely a weapon used to manipulate his family’s rivals. When Sal meets Bailey, everything changes. But when the intimacy and love Bailey offers is too much for Sal to take, he pushes her away.

She doesn’t give up that easily. Bailey’s been flying solo for so long as she tries to figure out what she wants to do with her life and when she meets Sal, she quickly realizes that loving him won’t be easy. And although she promised to walk away if he needed her to, she struggles to keep that promise. She’ll go to any length to win him back and claim his heart for good.

Reaching a man who thinks he doesn’t deserve love might be the biggest challenge of Bailey’s life. She’s willing to give him everything but Sal isn’t convinced he has anything to give her in return.

Love by the Rules:

Gemma is a survivor.

She never learned how to love while being raised in a world of seduction, power, money, and lies. But after helping put her parents in prison, Gemma is thrown out into the world with only her brother and cousin to guide her. When Cash comes into her life, Gemma pushes him away.

Cash wants Gemma to realize she deserves happiness and that he’s here to stay. He brings her into his family. He treats her the way she should’ve always been treated. Yet still she doesn’t see that she is not the things she’s done.

Yet her past may make a life together impossible but Cash is determined Gemma will love herself and then hopefully him.