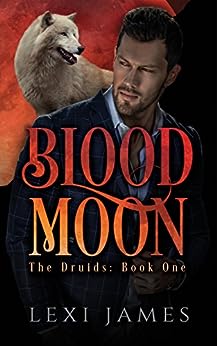 After a falling out with his father, Ronan Cormac ignored his family responsibilities and instead spent years as one of the most sought after agents in Hollywood, but too many superficial relationships had worn him down, making him long for a meaningful connection. In other words, the wolf shifter was ready for a mate and LA made it impossible for him to find one. Still, when his sister called him home, Ronan only reluctantly returned to Yellowstone to face his destiny, which meant he had to find his mate, complete the ritual before the blood moon, and thereby save the Druid pack.

When Autumn and her boyfriend started hiking Yellowstone one October weekend, she never imagined it would end with him humiliating her, dumping her, and leaving her alone in the wilderness. All she wanted was to find a guy who didn’t want to change her. By the time Autumn dried her tears, snowflakes covered the trail, darkness had fallen, and her demise appeared imminent, until a wolf saved her. Upon waking, she met Ronan, who seemed to want her as she was, until he asked her to make the biggest change of all.